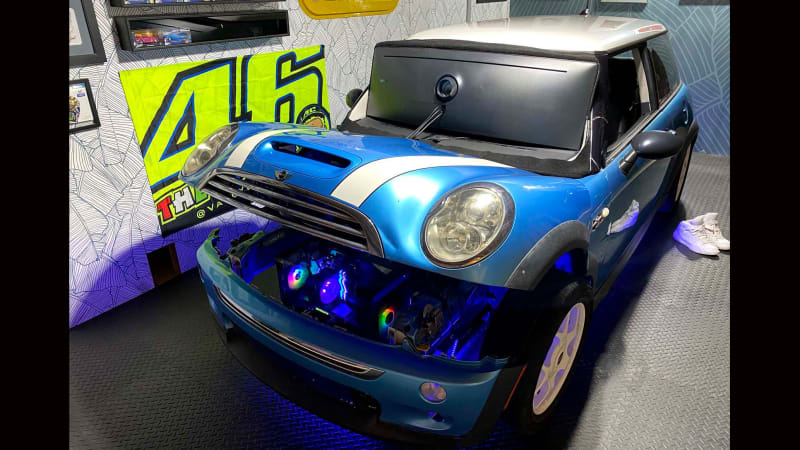 Brent Cheney is an artist and part-time racer who used to own a tuning shop for time attack cars. That’s why, when he decided to get into iRacing and wanted an immersive simulator, he wouldn’t settle for mere technical excellence. As first covered by Salt Lake City’s KSL news, then in more detail by Motor Authority, Cheney decided he wanted to cut a car into pieces, and rebuild it in the basement of his Salt Lake City, Utah house with a racing sim inside. He needed “the right aesthetic,” ruling out something like a Toyota Corolla, but he refused the sacrilege of cutting up anything too precious to an enthusiast. After narrowly missing out on buying a 1999 BMW M3 convertible, then turning to a Mitsubishi Eclipse done up in splashy green like Brian O’Conner’s car in the original “Fast and Furious,” he ended up with a Mini Cooper. The Brit was a better choice than the German and the Japanese, in fact, thanks to a hardtop that would create a dark enclosure, and seams and shutlines in the right places to hide the necessary cuts.

Cheney found a 2005 Cooper S that had been junked over an engine issue, getting the coupe for $1,000 and parting out the internals he didn’t need for the same $1,000 he paid. After watching a YouTube video on how to cut a car, he dismembered the Cooper into seven pieces with a cordless reciprocating saw wielding a Diablo Steel Demon 6-inch blade, and carried the pieces into his man cave. He reassembled those pieces on a wood base with the aid of 200 brackets and many more sheetmetal screws, nuts, and bolts. Once the car was put back together, body parts and trim pieces hid all the seams.

Before reinstalling the interior, the artist laid in the sim equipment. After doubling the minimum requirements for iRacing, Cheney’s system included an Intel Core i9 8-core processor NVIDIA GeForce RTX 2080 8 GB Founders Edition video card running Windows 10 inside a Thermaltake PC case under the Cooper S hood, as the new “engine.” A Fanatec Podium DD1 direct-drive steering column and wheel and Fanatec V3 pedals went in the cabin, along with a Harman Kardon home theater 5.1 surround sound system. He mounted the wheel on the Mini’s steering column with a fabricated adapter, put the Fanatec pedals where the car’s pedals had been, put a ButtKicker Mini transducer in the original Mini seat for extra realism, and hid all the wiring beneath the carpet and interior trim components. A keyboard and iPad in the cockpit provide more control and information, while the 49-inch curved Samsung monitor fit perfectly into the space formerly occupied by the windshield.

After eight weeks and $6,500, Cheney ended with a clean build, especially considering the first-timer and YouTube University aspects. The whole process is documented in a playlist on his YouTube channel, including a breakdown of his gaming system. We suppose after this he’ll consider building the Little Tykes bed out of a Ferrari F40 he had an idea for.