Maruti sticks to script with the smart and sensible second-gen Celerio.

The second-gen Maruti Suzuki Celerio is India’s most fuel-efficient petrol car. That one line introduction should stick in these times of low attention spans and high fuel prices. Now that you’re interested, here’s more on the latest Celerio. It’s new outside as well as inside, it’s built on a new platform and also comes powered by a new engine. As before, there’s manual and AMT options (the original debuted transmission type in India), with prices for the midsized hatchback ranging from Rs 4.99 lakh-6.94 lakh (ex-showroom India).

First things first. There’s no visual link between Celerios old and new. While the original was average in looks, the new one is more cheerful. It sports a rounded shape that actually looks better in the metal than it does in pictures. It’s not a classically handsome car, but the new Celerio sure has more presence than the old one. The slightly larger dimensions (it’s 55mm wider) help to this end too.

Curved and swept-back headlamps and an oval grille that’s bisected by a chrome bar give the Celerio a cutesy face, while the black plastic surround for the fog lamps and air dam add some sportiness to the look. At the sides, you’ll note fairly thick A- and C-pillars, a conventional glasshouse and soft contours at the doors and wheel arches. Top-spec models ride on 15-inch alloy wheels and they sure do their part to help the stance.

Sadly, the old model’s premium pull type door handles have made way for inferior lift type ones. And while the new Celerio has gained keyless entry, the position of the request sensor on the door makes it look like an afterthought. There’s a nice flow from the shoulder to the tail lights, with the Celerio’s rear continuing the curvaceous theme. 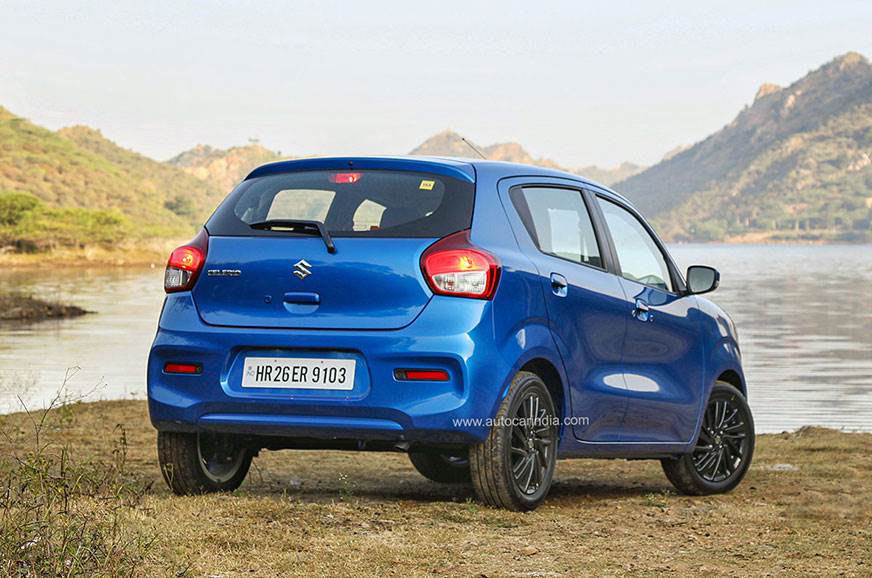 Under the skin, the Celerio has much in common with the latest of Maruti’s hatchbacks. It’s built on Suzuki’s Heartect platform and sticks to convention with its front MacPherson strut and rear torsion beam suspension arrangement.

Like the exterior, there’s more flavour to the new Celerio’s interior too. The winged look to the dashboard is quite stylish, the 7-inch touchscreen gets due prominence and the part digital instruments from the Wagon R also add to the appearance inside. The cabin sure looks a bit more upmarket than the old car’s. It’s practical, too, with door pockets and cupholders up front, and a large recess at the centre console to keep your phone and wallet. Feel your way around though and you’ll find that quality hasn’t taken much of a leap. Sure, there’s a nice textured finish on the dash top, but hard plastics make up most of the cabin. 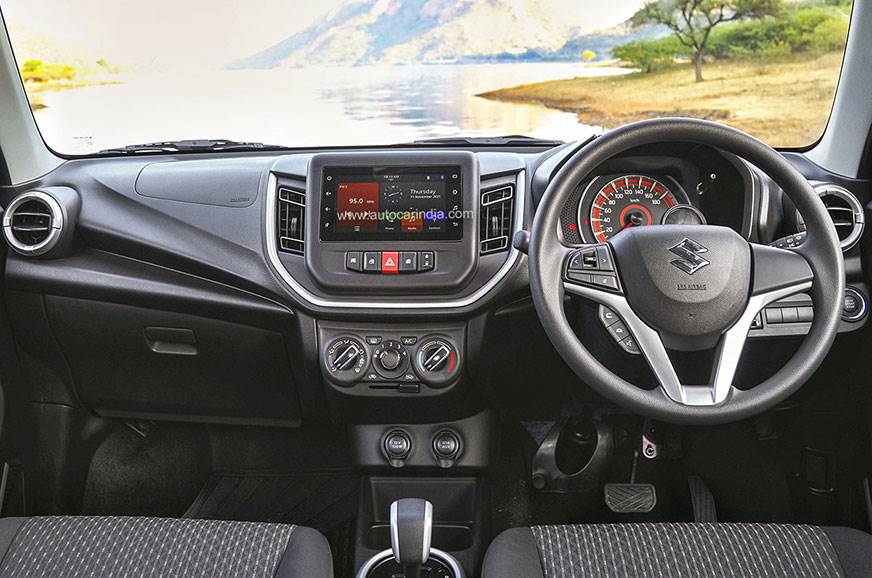 The Celerio isn’t a tall car, but getting in and out is quite easy. Drivers will also appreciate the inclusion of height adjust for their seats. As on the earlier Celerio, the front seats feature single piece backrests with integrated headrests and score well enough on comfort. Frontal visibility is good, but the relatively thick A-pillars did have us peer around it at crossroads. What also takes getting used to is the position of the window and door switches. The door lock/unlock and front power window controls are positioned on the centre console rather than at the doors. Passengers at the back will also have to reach out to the rear window controls that sit between the front seats. 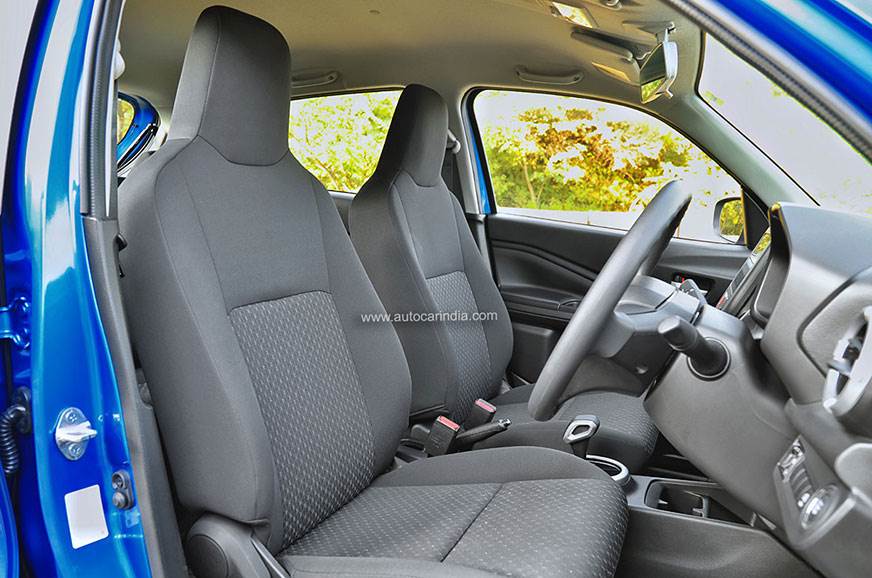 Rear seat comfort is good but not great. The large windows provide a decent view out, there’s ample kneeroom even for taller occupants, and the seat is well cushioned too. Trouble is, the seat’s integrated fixed headrests are just too small to offer any real head (and whiplash) support to taller passengers, and their low and angled position also makes them uncomfortable. Sitting three abreast is also a squeeze. 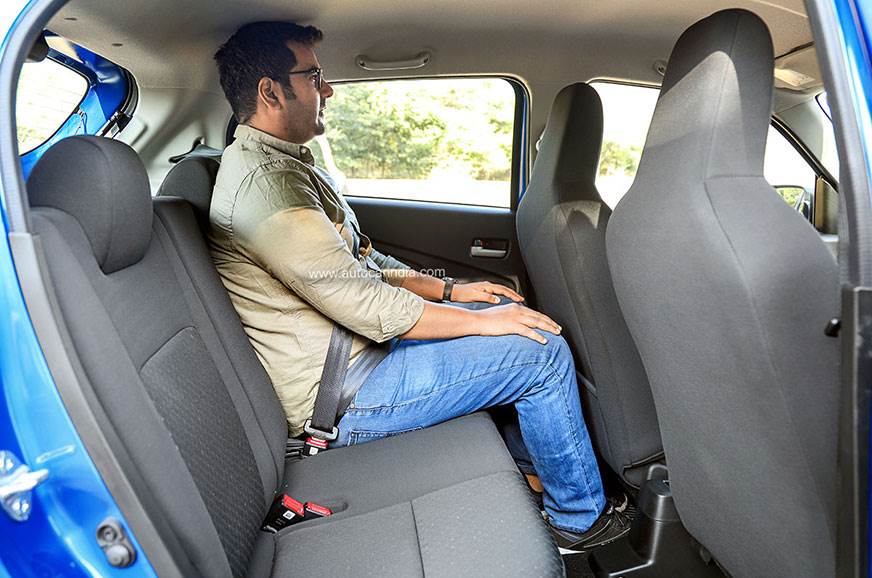 Where the Celerio has taken a big step up is in luggage space. The 313-litre boot can hold two large suitcases and two cabin bags with ease, and should you need more space, there’s the option to fold the 60:40 split rear seat backrest as well. You will need to load your luggage with care as the lip is high and not all that wide. 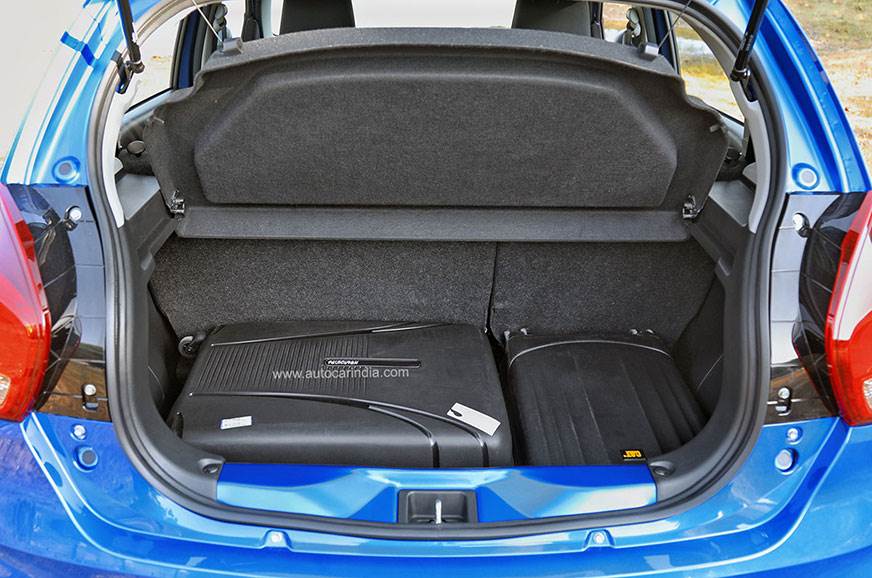 What features does it get?

The Celerio is on offer in four trims, namely LXI, VXI, ZXI and ZXI+. Featured here is the top-spec ZXI+ that packs in quite a few features. There’s keyless entry, push button start, driver seat height adjust, electrically adjustable mirrors, steering-mounted audio controls and front and rear power windows. Infotainment duties are handled by Maruti’s Smartplay unit that comprises a 7-inch touchscreen. The screen is nice enough to use and does well to offer Android Auto and Apple CarPlay connectivity. What’s missing, however, is a reverse camera that would have helped better justify the model’s relatively high price. And while auto climate control is not on the features list, we did find the air conditioner to do a good job of cooling the cabin. 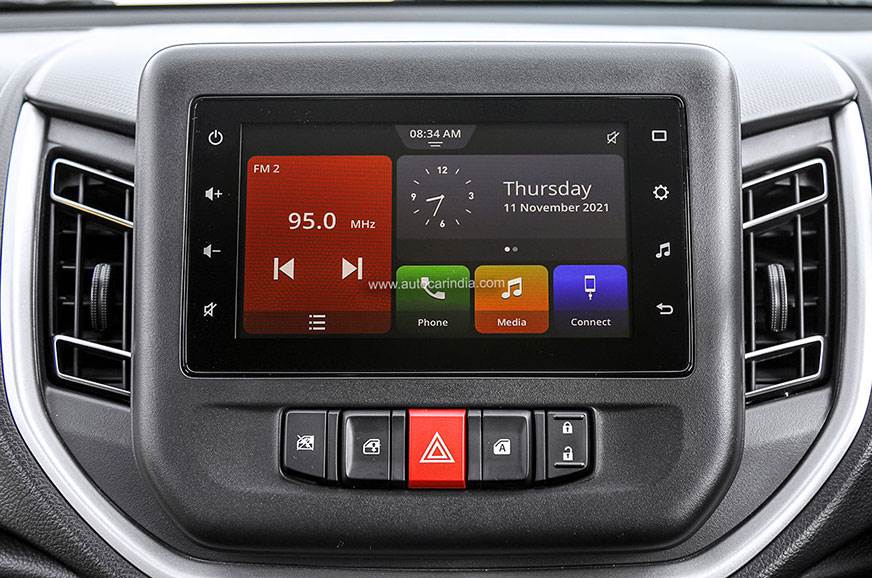 In terms of safety equipment, as standard, the Celerio gets dual front airbags, ABS, front seatbelt reminders and rear parking sensors, while hill start assist is part of the package on AMT versions. Higher spec models add in a rear wiper and defogger. On the subject, while the Celerio complies with latest Indian safety norms, it’s not been put to the test by Global NCAP as yet. 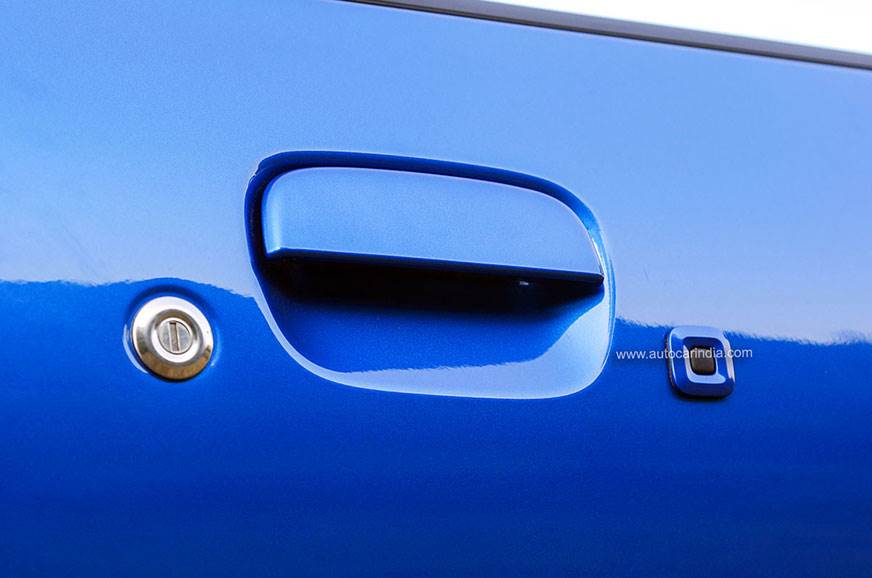 Powered by a new engine and built on a new platform, you’d expect the Celerio to be very different to drive, right? But the thing is, it isn’t. And that’s not necessarily a bad thing, because the original was a friendly car to drive. 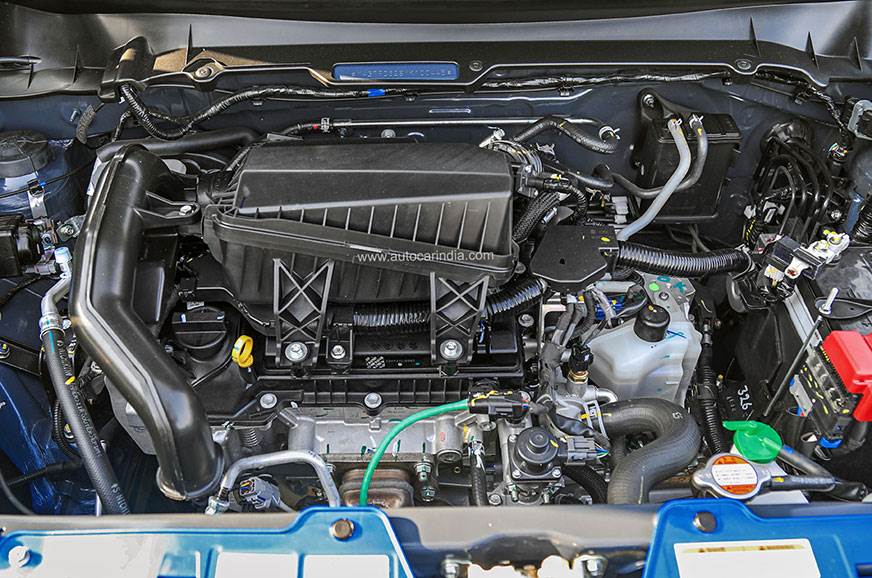 The Celerio debuts Suzuki’s K10C Dualjet engine in India. The familiar K10 in the name tells you it’s a three-cylinder, 1.0-litre unit, while the new Dualjet signifies the use of two injectors per cylinder. With an injector for each intake port, fuel and air mixing is much better, leading to higher efficiency. Idle start/stop is standard fit, too, and helps to the end of maximising economy. The most efficient of the Celerios, the VXI AMT, has been rated with an economy figure of 26.68kpl. The ZXI MT with us boasts of a figure of 24.97kpl. The difference in figures is likely due to different tyre sizes and weights. In terms of power and torque, the new engine’s 67hp and 89Nm unit is actually 1hp and 1Nm down on the old Celerio’s unit. 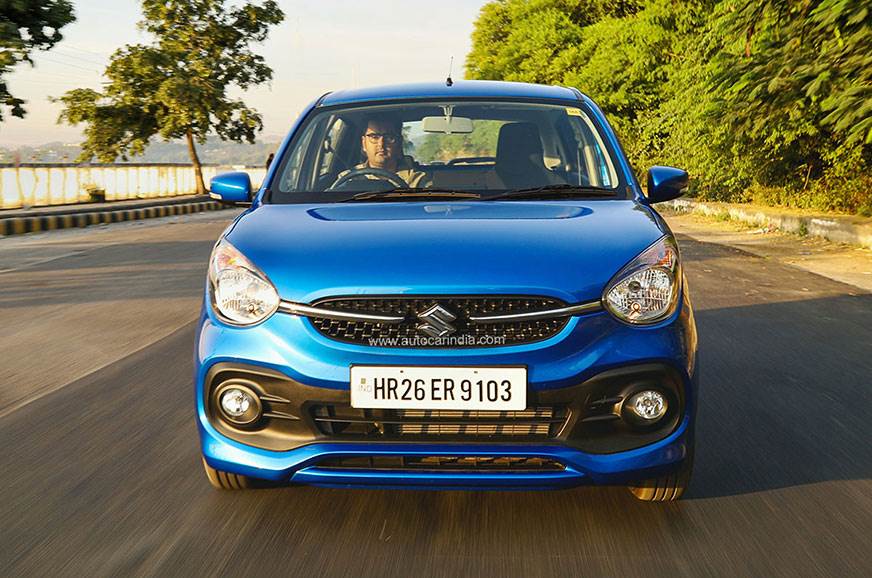 The engine might not be big on power but is very likeable in how it delivers it. There’s a clean build of power from low in the rev band and, while not peppy like the larger-hearted Swift, performance in town is actually quite nice. There are no flat spots or hiccups in the delivery and you will like the smoothness with which the Celerio goes about town. What also works really well is the idle start/stop. At long enough halts, the system switches the engine off. Depressing the clutch brings the unit back to life. The system is quick to respond and doesn’t leave you second guessing like similar units on some other cars. Trouble is, with the engine off, the air-con also shuts off, leaving only the blower on; not ideal on a hot day. You do have the option to switch idle start/stop intervention off via a button.

The Celerio will happily keep pace with city traffic and gets to highway speeds with ease too, though on the open road you will have to plan overtakings. For its part, the five-speed manual gearbox that comes allied to a light clutch doesn’t call for much effort. 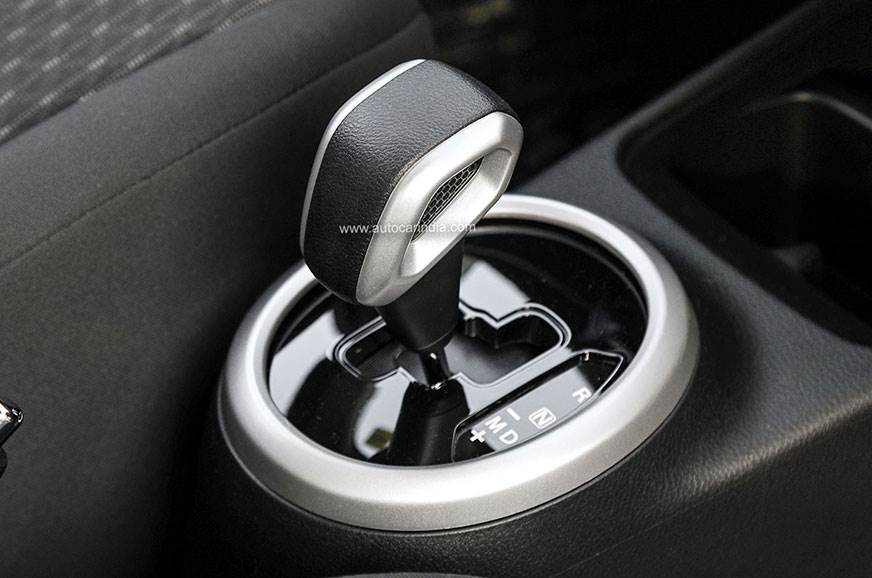 The Celerio AMT is also a rather nice proposition for those who don’t want the bother of shifting gears at all. Gearshifts are, for the most part, timely and the AMT-typical head nod or pause between shifts is well contained too. It’s still not as smooth as a torque converter or CVT automatic, but the AMT sure has come a long way since the first of the type on the original Celerio. You can take manual control via the snazzy gear lever too. The system responds well enough to manual inputs though, again, it’s best to adopt an easy-going driving style. 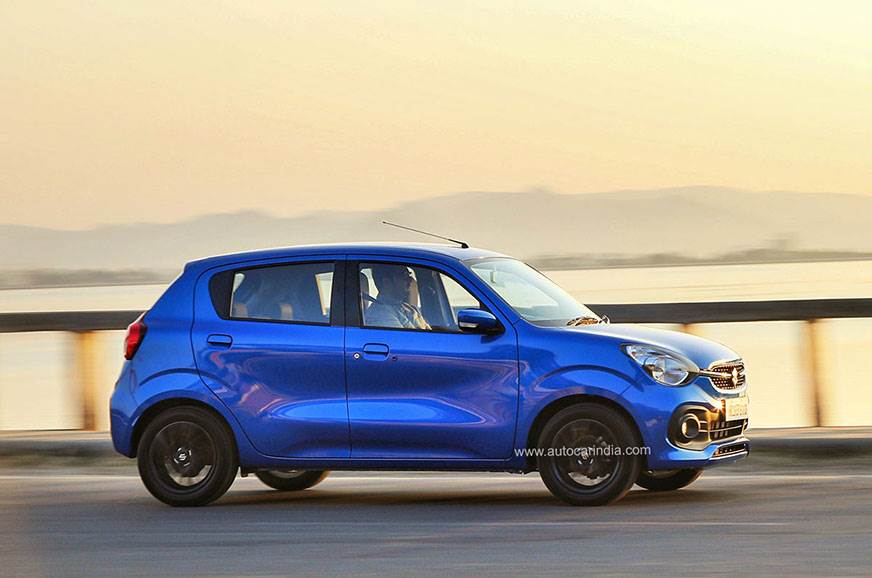 If your driving will be primarily in low speed city settings, you’ll take to the Celerio’s friendly manners. It’s got a small turning radius, it’s easy to park and the suspension also does a good job of soaking up the bumps. At higher speeds too, the Celerio feels quite surefooted though the suspension does crash through on potholes. Handling isn’t exciting, but the car feels composed and that’s just as well.

What remains a complaint is the lifeless steering. Sure, it’s easy to twirl, but it doesn’t self centre adequately, so you always have to keep a firm hand on the wheel.

Should you buy one?

Priced between Rs 4.99 lakh- 6.94 lakh (ex-showroom, Delhi), the Celerio goes up against the Tata Tiago, Hyundai Santro and Datsun Go. While the mid-spec versions that make the bulk of sales score well on value, the range-topping versions come across a touch pricey for what they offer. And it doesn’t help that the Wagon R with a larger and more powerful 1.2-litre engine costs less. 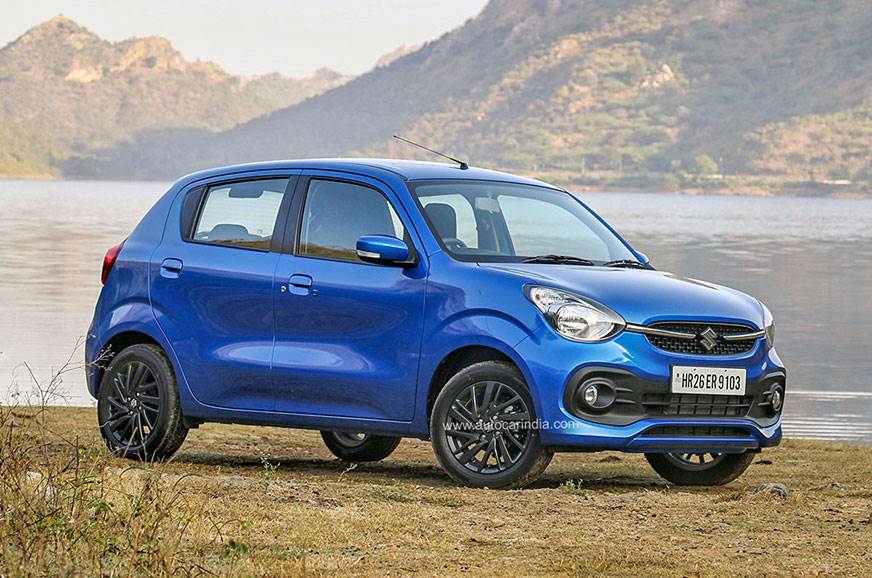 The new Celerio might not be a revolutionary product in any way, but there’s no denying that it offers most of what typical urban buyers want. It’s easy to drive and spacious, and that tag of India’s most fuel efficient car is sure to be a pull in its own right.

It’s not the car that will pull at your heartstrings, but, like the old model, remains a level-headed choice of city car.