After the EV6, comes the EV9. Kia made the official presentation of what it calls the Concept EV9 all-electric prototype today at the Los Angeles Auto Show. To be clear, this remains very much a concept, and a production version isn’t expected to surface before 2024. Some of the design elements on the prototype shown today may not make the journey between the two.

Still though, it’s nice to see what the Korean automaker has up its sleeve EV-wise, and this follow-up to the sleek, sporty EV6 crossover is a very different ball of wax. This is a highly rectangular large utility model – think of it as the rough all-electric equivalent of the Telluride people-mover – that seemingly pays little heed to aerodynamic demands, normally front and centre with EVs. 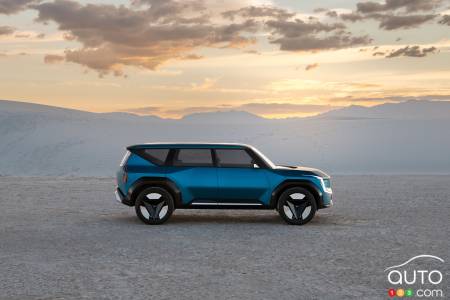 The EV9 is based on the Hyundai group’s E-GMP platform meant for all-electric powertrains. It provides an 800-volt electric system – and that happens to be almost the only figures Kia released today in connection with the new SUV. The automaker did say to expect a range of up to 300 miles (or just over 480 km), and 10-to-80-percent charge recovery in under 30 minutes on a fast 350kW charger.

We also now know the dimensions of the EV9, which is 4927 mm long, 2057 mm wide and 1778 mm high, with a wheelbase of 3098 mm. Meaning, it’s slightly smaller than the Telluride. And while its boxy shape doesn’t at first glance lend itself well to optimized aerodynamics, Kia says several design steps have been taken to enhance energy efficiency. Namely, the front end, vertical as it is, doesn’t have a grille.

Also, the roof rails are retractable and the side mirrors are gone, replaced by tiny cameras. Of course, we’ve seen those before on prototypes and they tend to get waylaid along the way to a production version, but we’ll see. 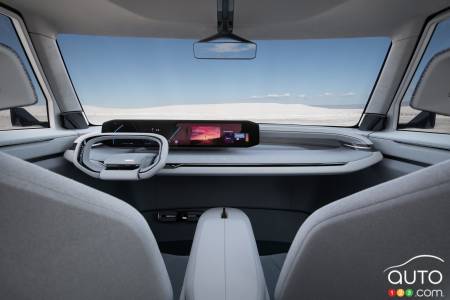 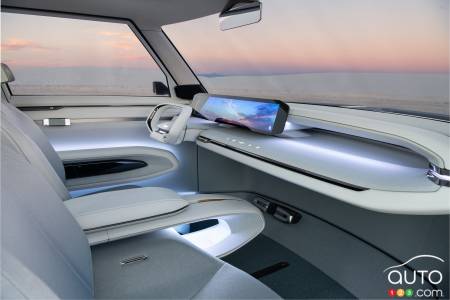 Inside, the reveal showed three rows of seats as expected, though they look to be more moveable than in the average SUV, so the front ones can be turned to face the others, and the second-row seats can be folded down to make a table. Up front, the 27-inch screen spans a large portion of the dashboard.

Today’s events at the Los Angeles Auto Show also included the presentation of Hyundai’s Seven concept, which presages the future Ioniq 7. Both that model and the EV9 are built on the same architecture and will surely share a number of other elements. We know that Hyundai’s model is expected to be ready for production in 2024, and so an educated guess puts the EV9 on the same timeline. 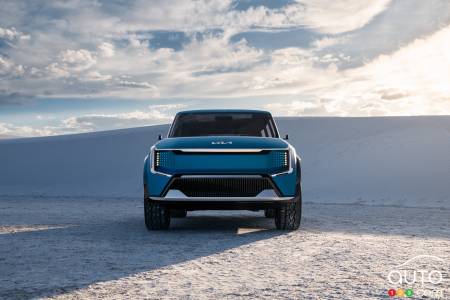 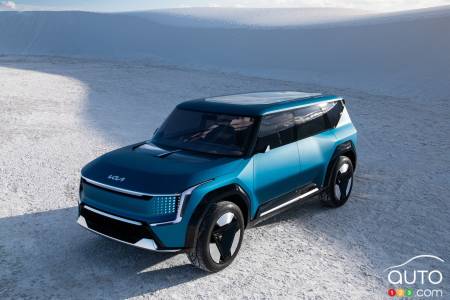 Kia Concept EV9, from above