Genesis gave its very first all-electric vehicle the official big reveal in South Korea tonight (tomorrow for them). The GV60 SUV is built on a dedicated EV platform that, the company, promises, will maximize both range and performance capabilities.

“The GV60 is the first dedicated EV model with the most dynamic design, representing Genesis’ electrification. It will set a new standard for luxury electric vehicles with a powerful driving performance and various key features which are emotionally connected to customers.”

Genesis Chief brand officer Luc Donckerwolke added a promise that the GV60 will “provide a differentiated experience that enables interaction with vehicles in Genesis’ own caring and considerate way.” That is in keeping of course with the new philosophy, unveiled at the beginning of September, that sees the brand seeking to create a “luxury brand lineup that interacts with drivers”.

Outside
The front-end design of the GV60 features the double-line lamps we’ve seen introduced into all recent Genesis model revisions. One difference in the case of this EV is that the trademark Genesis grille moves lower down due to cooling needs specific to the new EV platform. The model is also the first Genesis vehicle to feature a clamshell hood, in fact a single panel that encompasses not just the hood but the fenders as well. Another difference involves a new wing badge, thinner than before. 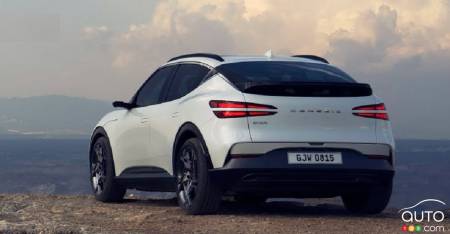 Moving rearward, the streamlined silhouette shows very few undercuts or lines for a seamless effect. At the same time the vehicle has a wide stance (and a short overhang) to underscore its athleticism. The wheelbase is thus suitably long at 2,900 mm (the GV70’s is 2,875, as a comparison).

Another notable feature – though it’s hard to get a good look at it from the initial images – is what’s called the Volt DLO (for Day Light Opening), a chrome element running from the top of the windshield backwards in a V shape. Other particularities of the first Genesis EV (and its smallest SUV to date, despite that wheelbase) include digital side mirrors and electric door handles. The handles automatically pop up when the driver approaches the car with their fob.

In back, the coupe-style roof ends with a distinctive fixed-wing spoiler. The rear fender accentuates the vehicle’s wide stance, and of course we find the Genesis double-line lamps, now de rigueur. 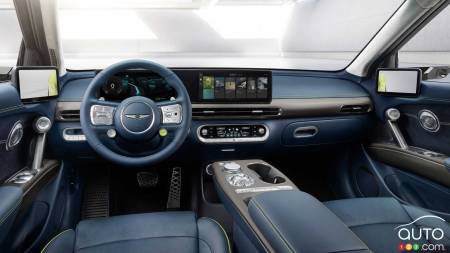 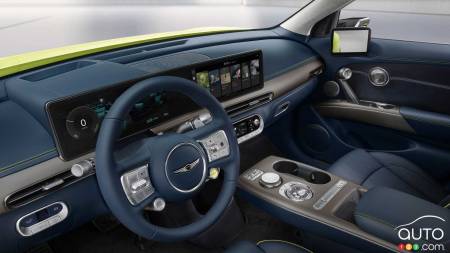 Inside
It might be small, but Genesis is touting the GV60’s spacious interior. We’ll get a better idea of the truth of that when we get in it. Otherwise, a central element of the interior environment (other than the massive screen spanning a good portion of the dash) is what’s called the Crystal Sphere, restring on the floating lower section of the central console. When you sit with the motor off, the sphere provides mood lighting; turn on the GV60, and the sphere rotates and the shift-by-wire (SBW) function appears. We can’t wait to see this in person.

That floating console is made possible in part by the flat floor, itself possible because of the nature of the electric powertrain. The idea is to provide occupants with as much open space as possible, even in a vehicle this compact.

Higher up, the aforementioned wide screen harbours Genesis’ next-generation infotainment system; users access everything from driving data to navigation to multimedia on the one display. 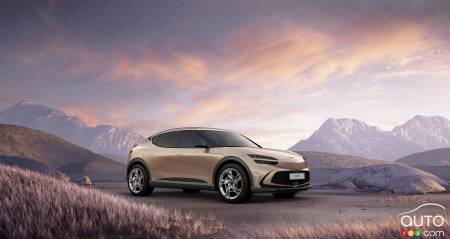 Colours
The GV60 is available in total of 11 colours, including four that are new to the brand lineup: São Paulo Lime, Hanauma Mint, Atacama Copper, and Atacama Copper Matte. The first of those is Genesis’ new signature colour for its high-performance electric vehicle.

Performance
The Genesis GV60 is based on the E-GMP platform created to underpin specifically BEVs. It can support three configurations – standard rear-wheel-drive, standard four-wheel-drive and a performance-version four-wheel-drive. Now, remember that that’s for the global market, and if we go by what Genesis has done with its latest crop of models, we can expect to see only AWD variants here in Canada.

All models feature a 77.4 kWh battery. The standard AWD configuration includes a 160 kW motor for the rear wheels and 74 kW motor for the front pair, delivering an output equivalent to 314 hp, and range in the neighborhood of 400 km (based on the South Korean EV certification system). The performance variant comes with two 160 kWh motors, with output equal to about 429 hp and a maximum range of about 368 km.

The GV60 will feature Boost and Drift modes designed to up the fun factor. The first is a type of launch control, the second optimizes distribution of driving power and braking. And if you need power for something other than the vehicle itself, know that the GV60 will have the ability to serve as a mobile power source – something we’ve seen with both the Hyundai Ioniq 5 and the Kia EV6.

There’s a ton of other tech that will feature ins this first EV to come under the Genesis banner, but given that what was presented today is for the Korean-market model, there may be differences for the North American version. We’ll have a chance to delve further into the model’s innovations and features when the model makes its first in-the-flesh appearance. We expect that to happen sometime in 2022.