Chances are that if you’ve ever driven anywhere, watched any political drama, seen any rap video or had a look at the livery car lineup at the airport, you’ve seen a Chevrolet Tahoe. It has become one of the most recognized vehicles on North American roads – especially parked just on the shoulder, with a push bar on the front – which is a feat because it is and has always been a pickup truck-based, ladder-framed basic two-box shape. And until the latest model you see here came out, it’s had pretty tame styling.

The Tahoe has legions of dedicated fans, however, and those fans have lent a level of brand equity to its name that you really can’t buy or pay for.

For 2021, though, the Tahoe is all-new with a host of new features, the goal of which is to make this popular SUV even more attractive to buyers. 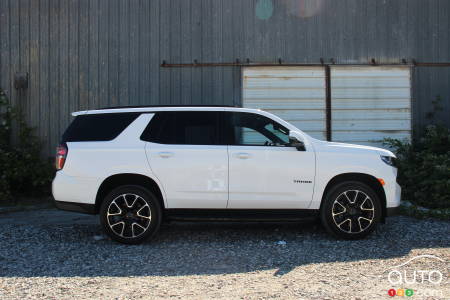 The exterior
It starts with the styling – actually, more specifically, it starts with that grille and those headlights. The headlights themselves are slim to the point they actually kind of remind me of those on the Chevrolet Camaro, while the DRLs are boomerang-shaped, and in tandem with the grille the whole shebang is actually shared with the Silverado 1500 pickup. The rear fascia, meanwhile, is dominated by huge TAHOE scripting, which works well and is on-trend when it comes to SUVs these days.

Other nice details include my tester’s 22-inch wheels (base Tahoes get 18-inchers; 20-in wheels are also available). The exact style seen here is standard on the RST, and they look great.

There are also some nice “Easter Egg”-type details as well, such as the Chevrolet scripting integrated into the left brake light, while the right light assembly features a subtle Bowtie logo. That tailgate, by the way, is a two-part affair in that you can either open up the entire door, or just the rear window so you don’t risk losing items on opening the hatch. 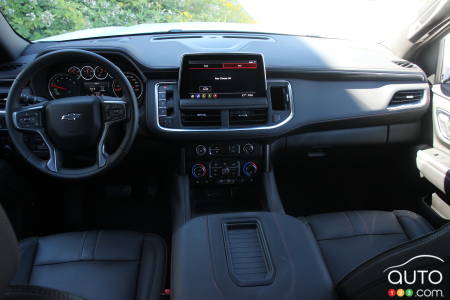 The interior
Inside, the truck’s RST trim means a black and red (officially called “Victory Red” – okay, then) leather. It’s eye-catching to be sure, and it does kind of bring to mind more performance-oriented Chevys such as the Camaro or Corvette, even if the “red” part of the equation doesn’t extend much past some stitching.

The big 10.2-inch infotainment screen, meanwhile, is all aces and it’s compatible with Android and wireless Apple CarPlay, which is right on and backed up by a massive wireless charge pad that looks large enough for a tablet, not just a smartphone. Chevy’s native interface isn’t too bad, though I used CarPlay most of the time.

The gauge cluster is a little tame-looking, but the TFT display between the two main gauges displays the most pertinent information succinctly and sharply, and can be easily navigated with steering wheel buttons. Which, along with your cruise controls, voice activation controls and heated steering wheel button, is all you’ll find on the uncluttered wheel. 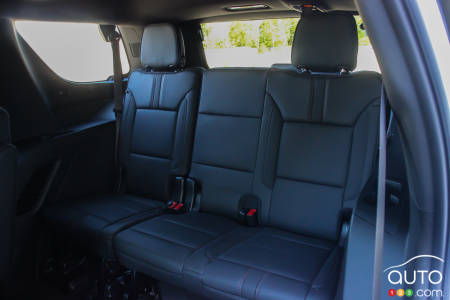 For 2021, the third row has become a little more habitable thanks to another big innovation for the ’21 Tahoe: independent rear suspension, something the Tahoe’s main Ford Expedition competition has had for quite some time now.

The new suspension is packaged much smaller than the old solid-axle setup, so it doesn’t infringe as much into the cabin, making for easier loading and more rear-seat legroom. The result is actually a fairly usable third row thanks to the space provided, as well as features like two USB-C ports, cupholders and storage bins. The seat cushions are still a little on the thin side but that’s usually the case when it comes to three-row SUVs. They’re also easy to access thanks to a slide-and-tumble second row, as well as the passage between the second-row captain’s chairs.

Not only does the new suspension make for more room inside, it also makes for a much smoother ride. The Tahoe is still a body-on-frame truck, but you don’t get anywhere near the shuddering through the chassis over bumps that you used to. The bottom line is the ride in here is properly luxury-spec. 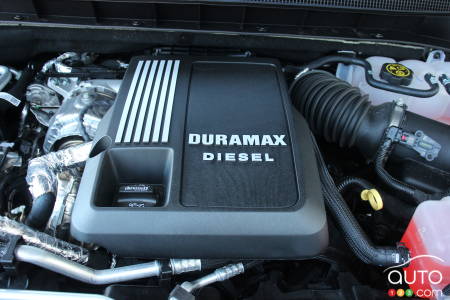 The powertrain
While the big new add in the power department for ’21 is the availability of a 3.0L Duramax diesel engine, which my tester featured. Which I do find a little strange, since the RST is the “sporty” version of the Tahoe, and I don’t necessarily associate sporty with diesel.

Nevertheless, power is rated at 277 hp and 460 lb-ft of torque, but thanks to a close-ratio 10-speed automatic transmission (your only choice for 2021), it feels almost more powerful than that. I never found myself wanting for more power, but while normally I’d say “if you want to tow, get the diesel” that’s not so obvious here. This version’s 7,600 lb. tow rating isn’t that much more than what’s delivered by the 5.3L gas V8, which you can also get in the RST.

Of course, since it’s a torquey engine that reaches peak torque at a lowly 1,500 RPM so coupled with that great transmission, I was able to achieve 6.2L/100 km on the highway. That is darn impressive for a 2,500-kg three-row body-on-frame SUV. Plus, it’s got a throaty growl that helps reinforce the feeling that this is a powertrain that will last a good, long while. 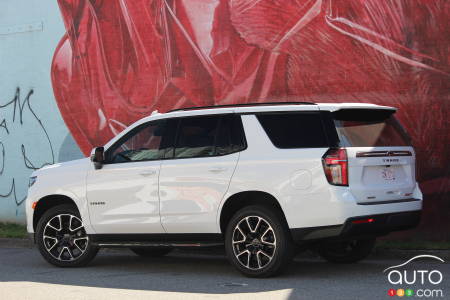 The price
It does come at a bit of a cost, though.

At its base, the RST starts at almost 70 grand for the 5.3L V8 – about 20 grand more than what the 2WD Tahoe starts at – so those fuel savings shine that much brighter.

Then, of course, you start adding packages: $3,255 for the Luxury Package that adds a power-adjustable and auto-heated wheel, power-folding second- and third-row seats, power-adjustable mirrors and memory seat settings, or the $695 max trailering package with its two-speed transfer case, or the gloss black wheels (that’s an eye-watering $4,165 more, please), or the $2,865 rear media package, and so on. Before you know it, you’re knocking on the door of $85,000 for your Tahoe RST, and it’s not even the highest trim.

The flip side of that, however, is that done right, the RST is in a bit of a sweet spot in the lineup, especially if you want your Tahoe to be a bit of a muscle truck. After all, it has the styling for that. Most are probably going to opt for the Z71, but the RST provides a tarmac twist on the Tahoe that offers a compelling alternative to the Z71’s off-road attitude. 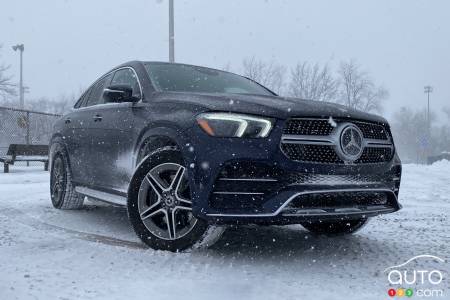 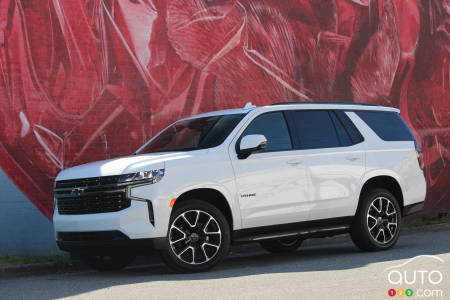